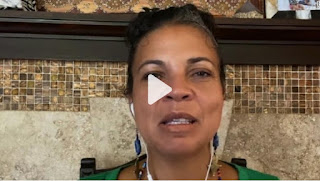 (CNN) On Monday, President Donald Trump went after attempts to strip the names of racists from buildings.
On Tuesday, it was a federal housing rule meant to combat racial segregation.

By Wednesday, Trump was calling the words "Black Lives Matter" a "symbol of hate" -- a description he's refused to use for Confederate emblems -- that would spoil the "luxury avenue" he once called home.
Navigating a precarious political moment, Trump continues seizing upon widening cultural divisions in a way he believes will appeal to voters concerned about safety and order -- despite polls showing wide disapproval of how he's handling race relations.
As he distributes wanted posters of suspected vandals on his Twitter feed and warns those who splashed red paint on statues of George Washington to turn themselves in, Trump is also stoking racial tensions using language and tropes that harken to the days of segregationist politics and fears of ruined neighborhoods.
The effort has been waged mostly on Trump's Twitter page, which over the weekend featured a video of a supporter in Florida chanting "White power." Trump later removed it, though he left up a video of two White homeowners in St. Louis protecting their stone mansion with firearms as a Black Lives Matter march went past.

Even off Twitter, aides say Trump has been focused most intently in meetings on the issues surrounding statues and monuments -- and not on the raging coronavirus pandemic or intelligence suggesting Russia paid the Taliban to kill American troops. He has instructed administration officials to also focus on the issue and on Wednesday, the Department of Homeland Security announced it was forming a task force to "protect American monuments, memorials and statues."

Some of the President's political advisers worry Trump is both distracted from the actual health and economic crises facing the country and alienating moderate swing voters whose views on race have evolved past viewing Confederate monuments as "history."
But Trump has insisted the issue is a winning one for him and has refused to change course.
"This is a battle to save the Heritage, History, and Greatness of our Country!" he wrote on Tuesday, using his campaign hashtag #MAGA2020.
Polls have shown voters now largely disapprove of Trump's handling of race, including large majorities of women. Sixty-four percent of women said in a New York Times/Siena poll last week they disapproved of how Trump is handling race relations.
Despite those figures, Trump has not shown a willingness to change course. This week he has sided publicly with those who want to maintain monuments to America's racist past -- including on Tuesday threatening to veto a defense authorization package if it includes a provision to rename some military bases honoring Confederate leaders.
"I will Veto the Defense Authorization Bill if the Elizabeth 'Pocahontas' Warren (of all people!) Amendment, which will lead to the renaming (plus other bad things!) of Fort Bragg, Fort Robert E. Lee, and many other Military Bases from which we won Two World Wars, is in the Bill!" Trump wrote.
Trump has also decried decisions to remove the names of Woodrow Wilson and John Wayne from buildings and has launched an all-out effort to punish people who vandalize national monuments.

On Wednesday, the President fumed at a plan announced recently by officials in New York City to paint the phrase "Black Lives Matter" in front of Trump Tower on Fifth Avenue. It would be the second time the words appeared in large letters outside one of Trump's homes; Washington's mayor had the term painted in large yellow letters on a street near the White House last month.
Work on the plan will begin in the coming days, Mayor Bill de Blasio said on Wednesday. A day earlier, the New York City Council approved a budget that includes $1 billion in cuts to the city's police department.
"NYC is cutting Police $'s by ONE BILLION DOLLARS, and yet the @NYCMayor is going to paint a big, expensive, yellow Black Lives Matter sign on Fifth Avenue, denigrating this luxury Avenue," Trump wrote on Twitter shortly after de Blasio announced the timing of the plan. "This will further antagonize New York's Finest."
The President, who has resisted calls to condemn white nationalists, went on to call the words "Black Lives Matter" a "symbol of hate" and suggested that police officers could block the work: "Maybe our GREAT Police, who have been neutralized and scorned by a mayor who hates & disrespects them, won't let this symbol of hate be affixed to New York's greatest street. Spend this money fighting crime instead!"

The message came after a late-night tweet on Tuesday suggesting an Obama-era federal fair housing law meant to combat segregation is having a "devastating impact" on suburbs. Trump is seeking to shore up his standing with suburban voters, who were key to his victory in 2016 but which polls now show he is losing badly -- in part because of his divisive views on race.
An NPR/PBS/Marist poll this week found Biden with a 60%-35% lead over Trump in the suburbs -- compared to Trump's 49%-45% victory there in 2016, according to exit polls.
In the message, Trump wrote he was reviewing the Affirmatively Furthering Fair Housing mandate, which was enacted in 2015 as a way to bolster the 1968 Fair Housing Act, which outlawed restrictions on selling or renting homes to people based on race — and which Trump and his father were accused in a federal civil rights case of violating in 1973.
"At the request of many great Americans who live in the Suburbs, and others, I am studying the AFFH housing regulation that is having a devastating impact on these once thriving Suburban areas," Trump wrote. He said his election year rival Joe Biden wanted to make suburbs "MUCH WORSE."
"Not fair to homeowners," Trump wrote, "I may END!"
Yet it's unclear how Trump's message — which in its timing and content seized upon conversations surrounding race and equality -- might help.

Despite the Fair Housing Act being in effect for decades, many neighborhoods still remained segregated, with minority communities less likely to have access to good schools, health care and public programs necessary to help citizens rise out of poverty. AFFH was considered essential to further level the playing field for underprivileged populations.
In its official definition of the rule, the Department of Housing and Urban Development says AFFH is designed "to take meaningful actions to overcome historic patterns of segregation, promote fair housing choice, and foster inclusive communities that are free from discrimination."
The rule required communities that receive federal funding to submit assessments and analyses on their fair housing practices, which advocates of the rule say are necessary to hold them accountable for upholding the Fair Housing Act.
Trump himself was accused of violating the Fair Housing Act when he was running his family's real estate company in the 1970s. At the time, the Justice Department alleged that Black people who inquired about apartments in Trump buildings were turned away but that White renters were offered leases.
The case was eventually settled after Trump attempted to counter-sue.
The Trump administration had already said in 2018 it was delaying implementation of the AFFH rule, part of its larger efforts to dismantle the legacy left by President Barack Obama. At the time, HUD cast the decision as part of its broader efforts to reexamine rules left over from the previous administration.
Earlier this year, HUD Secretary Ben Carson proposed a change that would essentially eliminate AFFH, saying that mayors and local officials know their communities better than the federal government and are better positioned to make housing decisions. That was met with fierce opposition from housing advocates, who said eliminating the rule would make housing less fair.
"This attack on fair housing is part of the Trump administration's larger ongoing efforts to dismantle civil rights protections, and it must be stopped," said Lisa Rice, president and CEO of the National Fair Housing Alliance, in March.
Source: cnn.com