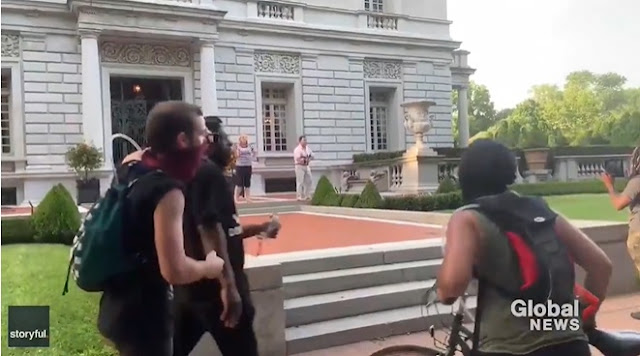 A white couple pointed a pistol and an assault-style rifle at protesters marching past a mansion in St. Louis, Mo., on Sunday, drawing a retweet from the president and fierce debate on social media.


The incident happened on Sunday evening while Black Lives Matter protesters were passing through a lavish gated community on their way to the mayor’s residence to demand her resignation.
Video recorded from the march shows a middle-aged white man brandishing an AR-15-style rifle on the front step of the home, which is located just inside the gate of a private street. A middle-aged white woman is also shown holding a pistol alongside the man.
The video shows the barefooted couple yelling and pointing their weapons at the protesters, who make no move to approach them.
“Let’s go!” a voice in the march can be heard shouting. “Let’s go!”
A second video shows the woman pointing her pistol at protesters from the lawn of the home. The man can be seen standing on the mansion’s porch with his rifle behind her.
The protesters are shown standing on the sidewalk and the street.