COMOROS THANKS MADAGASCAR FOR SUPPLY OF COVID - ORGANICS 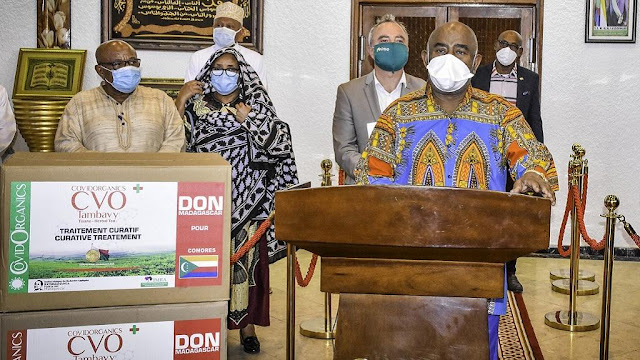 The Comorian president Azali Assoumani thanked the people of Madagascar and President Rajoelina for donation of COVID-Organics, the purported virus preventative and curative mixture.
Also included in the Malagasy donation were doses of chloroquine and surgical masks, the president further disclosed. Azali said the gesture was a “perfect testimony to the solidarity which unites the peoples of the Indian Ocean, faced with the coronavirus pandemic.
A delegation from Comoros flew to Madagascar to receive the donation weeks after the country expressed interest in the mixture. Other African countries that have been supplied include Chad, Equatorial Guinea, Guinea-Bissau, Republic of Congo, DR Congo and Tanzania.
The Guinea-Bissau consignment was also meant for countries in the West African bloc, ECOWAS. Nigeria has said it will import its part but subject it to necessary tests before using them or otherwise. 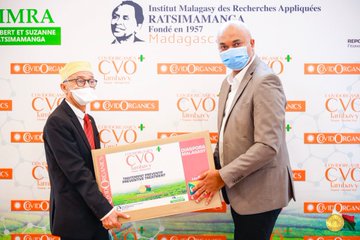 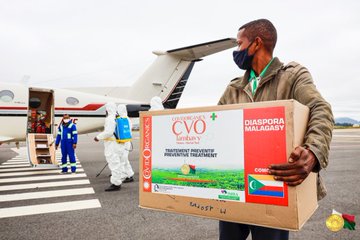 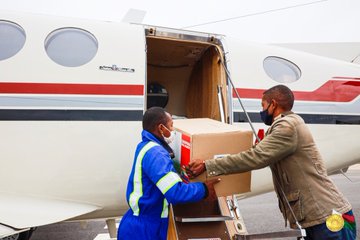 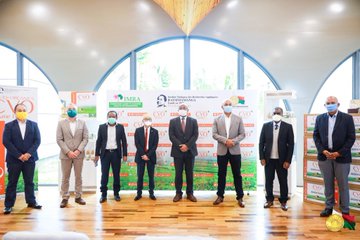 340 people are talking about this

“With respect to CovidOrganics, Madagascar is with his African brothers to heal and save lives. Our duty is to preserve the health of our people.
“Chad sent a plane to collect CVO donations. Thanks to President Idriss Deby Itno for his confidence,” these sentences were in a tweet posted by by the Malagasy President Andry Rajoelina on Saturday, May 9.
Accompanying the text were photos of an official Chadian plane in Antananarivo to take delivery of the Covid-Organics medication that Madagascar insists cures the virus. A second version of it can act as a preventative measure, Rajoelina said weeks back.
The consignment is a donation from the Malagasy government to Chad as has been the case with previous donations sent to Equatorial Guinea, Guinea-Bissau (reportedly on behalf of ECOWAS, which the bloc has denied ordering for and or endorsing).
Tanzania, the Congos – Republic, Democratic Republic; have all been served the medication which till date is yet to be scientifically tested and or certified by any independent medical outfit. 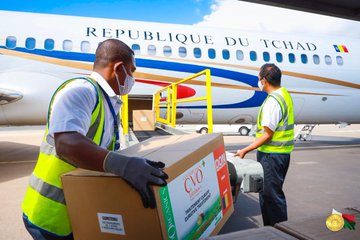 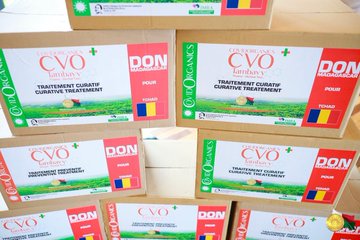 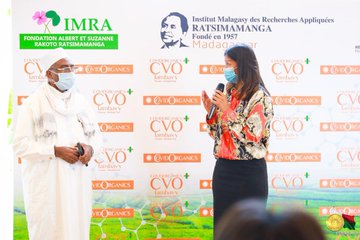 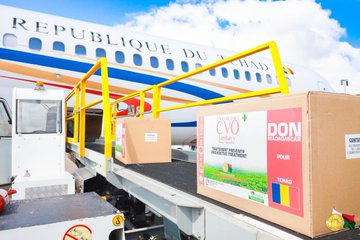 942 people are talking about this

Barely a week since President Magufuli of Tanzania said the country was interested in COVID-Organics, the Malagasy preventive / curative, potion for coronavirus, a consignment was delivered on Friday according to reports.
The donation comes days after the Republic of Congo and the Democratic Republic of Congo received their donations. Equatorial Guinea and Guinea-Bissau have also been served.
The Guinea-Bissau consignment, according to Malagasy President Andry Rajoelina, was a donation for the West African bloc, ECOWAS, but the group this week said it had not ordered for nor does it recommend the untested and unscientific medication.
Tanzania is currently the East Africa Community’s second most impacted country behind Kenya. The country has 509 cases with 21 deaths and 183 recoveries as of May 9.
The president also made news headlines this week after claiming that non-human samples had tested positive for the virus. Head of the country’s national laboratory was subsequently dismissed. The Africa Centers for Disease Control rejected Magufuli’s claims stressing that the said kits were certified.

#Tanzania’s govt receives its consignment of #Madagascar’s “Covid herbal tonic”. A few African countries have ordered the tonic which Madagascar’s president says can “prevent & cure” #covid19. The WHO & Africa CDC have cautioned against untested remedies. https://twitter.com/TZMsemajiMkuu/status/1258752766144589825 … 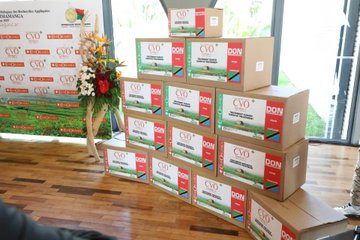 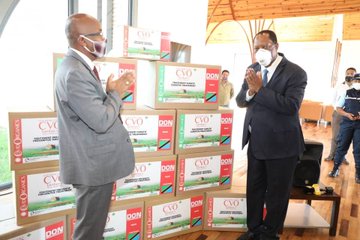 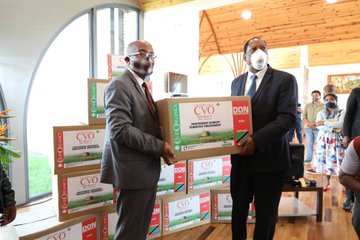 22 people are talking about this

Two more African countries have joined the list of patrons for Madagascar’s purported cure for COVID-19. Tanzania and Comoros confirmed their interest in the herbal cure over this weekend.
The Comorian president, Azali Assoumani, held a teleconference with his Malagasy counterpart, Andry Rajoelina, following which a formal request was made for the product.
Rajoelina posted a screenshot of their meeting on Twitter with the caption which read in part: “He (Assoumani) wishes to benefit from CovidOrganics for Comoros. We will supply them as a sign of solidarity with our brothers in the Indian Ocean!”
In the case of Tanzania, President John Pombe Magufuli whiles speaking at an event on Sunday disclosed that the country will also make requests of the herbal cure to help in the fight against the pandemic.
“I have been in talks with Madagascar. They say they have discovered the medicine for COVID-19. We will send a plane to bring the medicine to Tanzania so that Tanzanians can benefit from it,” he is quoted to have said.

Tanzania president Magufuli says some of the testing kits donated to Africa are fake. He says animal, bird and fruit samples secretly sent to the National lab returned positive for the coronavirus - including a bird, a goat and pawpaw.

551 people are talking about this
Meanwhile the Guinea-Bissau delegation that took flew to Madagascar to take the consignment have returned home with the products. Equatorial Guinea was the first country to receive the donation.
The Republic of Congo also announced on Saturday that a consignment will soon be imported. So far, Rajoelina has received praise from a number of his peers including presidents of the Democratic Republic of Congo and Senegal – all of whom he has held teleconferences with.
During an African Union meeting late last month, he stressed the importance of the herbal cure – a variant of which prevents the virus, whiles another cures it. Speaking to colleague heads of state with a bottle of COVID-Organics on his table, he reiterated the viability of the herbal cure.


“There are two treatment protocols (curative and preventive). The state of health of Covid-19 patients who took Tambavy CVO CovidOrganics improved after 7 days and fully recovered after 10 days,” Rajoelina said in an April 30 tweet.
Source: Africanews.com